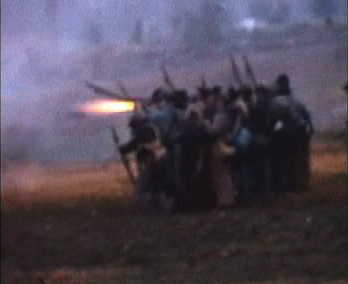 On December 12, 1863, General Ambrose Burnside’s Army of the Potomac engaged General Robert E. Lee’s Army of Northern Virginia in the town of Fredericksburg, Virginia. Before Burnside’s army could enter the town, Union engineers were forced to lay pontoon bridges across the Rappahannock River under withering fire. Close combat through the streets of Fredericksburg and multiple assaults on the Confederate army entrenched in the heights behind the town resulted in heavy Federal casualties, which forced an eventual withdrawal.

In November, 2001, I attended a small and relatively informal reenactment of the battle of Fredericksburg. About a hundred men and women did their best to illustrate the actions of the thousands of young men who offered their lives a century earlier. An air of absurd theater suffused the entire event, which provided the ground for its peculiar truth. Everyone played their part exceedingly honestly and well, and left something on the film I was myself surprised to find there.