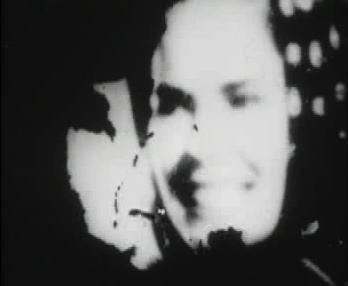 Whispering Hope, or Grace and How to Get It.

I know of only one film-record of Oona Chaplin (nee O'Neill), this screen-test made for a film in which she was cast and never appeared, having met and married Charlie Chaplin before shooting commenced. Some say that Chaplin himself directed her; history says otherwise. To hell with history. Hers was quite possibly the briefest film career ever. But then again, brevity is no obstacle to greatness.

I rephotographed the original screentest, doing 20 frame (as I recall...) lap dissolves from one from to the next. The idea was lifted wholesale from David Rimmer, though I've never seen the film(s?) in which he used the technique. Sailboat, I think, for one. I liked the brief transition from still to motion in Chris Marker's La Jetee, and wanted to extend it somehow. Anyway, I didn't like the result at first, as the image shifted a lot. So I made a duplicate negative and did some damage to it to obscure the hiccups. Ultimately, it was exposed to chemicals, buried, and left on the fire escape for a year. What remained I untangled, spliced together into something approaching a continuous strip of film, and had printed. The result became the master positive. The sound consists of a beat-up 78 of a song called "Whispering Hope," played at 33 rpm.

Unfortunately, this film seems particularly unsuitable to transmission over the internet. My apologies for the poor image quality.

"As I now beheld the robe, it seemed to me suddenly to become a mirror-image of myself: myself entire I saw in it, and it entire I saw in myself, that we were two in seperateness, and yet one again in the sameness of our forms..." The Hymn of the Pearl (Hans Jonas, trans.).

Posted by Brianlfrye at 9:48 PM