Robert Beck is Alive & Well and Living in NYC 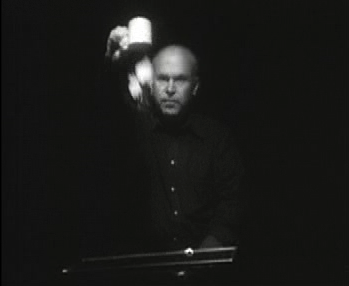 Robert Beck was an American soldier from Chicago who served in the First World War. Struck deaf and dumb by shellshock, Beck was sent to an English sanitarium to convalesce. At some point, the patients attended a movie. Beck began to laugh, and was suddenly cured of his affliction. He became the patron saint of New York’s Robert Beck Memorial Cinema, dedicated to films which recall the marvelous. On September 26, 2000, Stuart Sherman, the great performance artist and filmmaker, presented several of his films, interspersed with “perfilmances,” in which he re-enacted the passion of Robert Beck. This film is a record of that “spectacle,” shot by Lee Ellickson, and accompanied by Maria Callas. Stuart Sherman died on September 14, 2001 in San Francisco. This may have been his last New York performance.
Posted by Brianlfrye at 12:41 AM