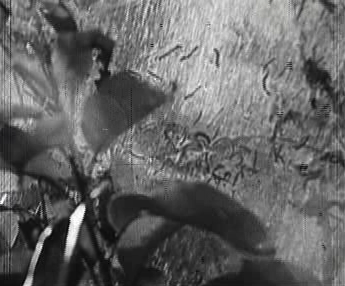 An essay toward documenting the ineffable. I’m told that all philosophy springs from one question: why is there something, rather than nothing? These, perhaps, are fragments of one man’s answer to that question. He spoke to someone; I encountered his ghost and replied with this film. One might consider it a dialogue between a man of Faith and one who has merely tasted of the absurd, yet struggles to ingest it.

"[Frye] aims to blur the line between completed film and unfinished experiment -- many of his best pieces look like fragments or rushes. His work is relentlessly self-questioning, offering a subtle, ever shifting mix of open-endedness and structure. The Letter is composed of "visually interesting" shots, he says, from the outtakes he found for an unidentified documentary. And his film looks like outtakes, with pans around a cemetery and an unexplained bald man. Later a shot of worms moving against a mesh screen introduces a different kind of imagery and motion -- and as in most of Frye's best work, there's something creepy about the image and how little it explains. Watching Frye's films, the viewer often feels trapped in a box with only a few peepholes, each of which distorts the world in a different way." Fred Camper, "Cinema of Possibilities," Chicago Reader, June 28, 2002.

By the waters of Babylon there we sat us down and wept, when we remembered thee, O Zion. As for our harps we hanged them upon the willow trees. For they that had brought us to misery. . .

This reminds me of a statement that an old drunk that had been converted had to say. He said, yes, since I’m saved, I can do what I well please, do what I want to do. I can go out and get drunk as much as I want to do. Thank God, I don’t want to go out and get drunk anymore. It’s changed me. So, we are freed from the law by Jesus Christ. It doesn’t mean this gives you license to go out and commit mayhem, rape, murder, or whatever your carnal side would urge you to do. It doesn’t mean that at all. It means you’re free from the burden of the law.